The stop-start $240 million USD project is due to start again soon. Work on the 42 floor tower originally started in 2008, but it was subsequently postponed in 2009.  After resuming in 2010, it was again postponed in 2012. Work started again in the following year, only to stop again shortly after and it has yet to start again. However, all news points to the fact that construction will be starting again very soon. 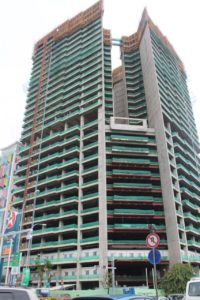 The two South Korean companies responsible for the development of the Gold Tower 42 development are Yon Woo Cambodia and DAIHAN Real Estate and they blamed the worldwide economic crisis for the delay in the multimillion dollar project. The site currently stands at 32 floors, just 10 short of total numbers of floors, of which the tower takes its name. Although workmen haven’t been seen on the site for months, it would appear that they will be returning to work soon.

Mr Tip Seiha, a spokesperson for the Ministry of Land Management, Urban Planning and Construction, has said that work will resume on the project that sits on the corner of Monivong and Sihanouk Boulevards in March this year. The ministry invited representatives from the project’s developers to discuss when the project is likely to resume and they promised that it would start again in March 2015.

Leaving the property sitting in a half finished state will cause other property developers to lose confidence in Phnom Penh’s booming property market. It is hoped that once work resumes, confidence will increase. This can only be good news for Cambodia prior to ASEAN integration as many new investors into the country are expected after tax barriers have been reduced.

At the moment, the construction site is an eyesore on the skyline of a growing Phnom Penh city and city planners will be eager to get the project moving again soon. It can only be a good thing for the city if construction actually does start again in March as the developers have promised.

Follow us on the following social media websites to get regular updates about properties in Siem Reap.